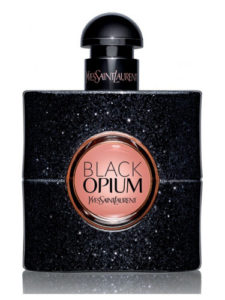 Tomorrow is National Coffee Day and I’m thinking about Black Opium. Launched in 2014 by Yves Saint Laurent, it’s a coffee-laden rock’n’ roll flanker of the original groundbreaking Opium which was released in the 1970’s.

Opium created quite a buzz with its shocking name and rich, sensual and spicy scent. The bottle was designed in the shape of a Japanese bottle where the samurai kept their opium pills. This opulent, baroque style composition re-ignited a craze for big oriental scents and invoked images of exotic far-away lands by way of sandalwood, patchouli and incense. Due to clever marketing ploys where orders were cut the fragrance always on back-order. This only fueled the cravings of Opium addicts.

Black Opium escaped my attention until pretty recently. I actually loved Opium back in the 80’s. Back then it was toe to toe with Giorgio Beverly Hills. Smelling them now really is a blast from the past. For whatever reason, and it might have had something to do with the fact that Opium was my mother-in-law’s signature scent – and we had a less than perfect relationship although she’s gone now and may she RIP – I’d kind of steered away from anything related to it.

Black Opium is nothing like Opium. It’s not like they’re polar opposites. but it’s a much sweeter gourmand scent. There’s a note resembling pear that hits you right off the bat coupled with a one of my favorites – jasmine.  Then comes a peppery element as well as a hint of patchouli, but what’s really prominent are coffee (strong) and vanilla (sweet) notes. Granted, the bitterness of the coffee is definitely rounded out by the vanilla but it goes into a sugary caramel mocha territory.

After a while the sugary macchiato sweetness becomes grating and for me headache inducing. Even though caramel macchiato is one of my favorite Starbucks drink it’s not one I’ll be dousing myself with. Not a perfect match for me!

The bottle is the original shape and decorated in sequins.