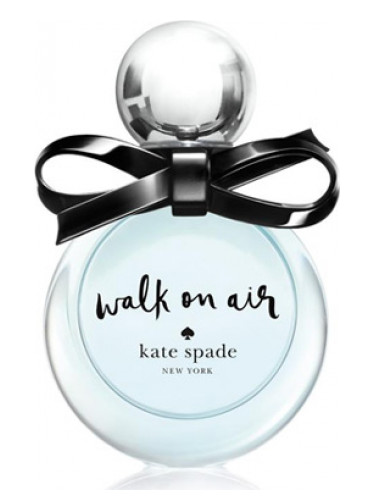 Launched in March 2015, Walk on Air by Kate Spade wears like a carefree stroll in the park without a care in the world. The fragrance was created by perfumer Rodrigo Flores-Roux, who also is the nose behind a number of noteworthy fragrances such as Estée Lauder Bronze Goddess  and Clinique Happy.

Before venturing into perfumeland, Spade was famously known for her colorful yet classic style of women’s handbags marked with a sleek black spade and a classic label in lowercase font.  Her first fragrance, named simply Kate Spade, was released in 2003 and was a creamy floral concoction that I was enchanted by for a number of years before it was discontinued.

Walk on Air was supposedly meant to embody femininity and the scent of New York.  Much like the handbags Spade is so famous for, it smells like a timeless and ladylike scent that comes off as light and cheery. I wouldn’t call it a ringer for Happy by Clinique but if you appreciate Happy you might really enjoy this too.

The blue perfume housed inside the cute bottle with a black bow is so Kate Spade-esque ?

Walk on Air is a lily of the Valley scent first and foremost, but it also includes a number of green notes such as fern and violet leaves. This gives it a freshness and brightness along the lines of Hermes Jardin Sur Le Nil. A powdery iris note gives it a mellow and almost musky softness after wearing it for an hour or so.

If you’re looking for an understated springtime scent that reminds you of lilies blooming and fresh cut grass in the background, put this on your must-try list.

Fragrantica credits Walk on Air with the following notes:

I’m not familiar with the scent of Solomon’s Seal but I did a little research and it turns out that the root of this herb has a numerous medicinal and health restorative properties. In 2010, the US Department of Agriculture identified it as a Culturally Significant Plant, noting its restorative value among north American Tribal peoples. Its flowers, which bloom in late spring to early summer have a sweet, lily-like fragrance.