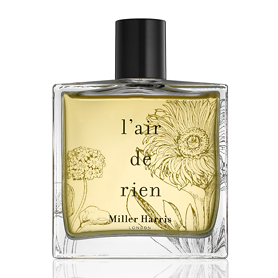 Knowing all too well that names reveal absolutely nothing about what’s inside the bottle, I perversely went to Google find that the French to English translation is “poker face”.  Now I just knew I had to try L’Air de Rien by Miller Harris! What in the heck would a perfume called “poker face” smell like and what a weird name. Then again, it seemed to work for Lady Gaga. Truthfully, I was getting a little tired of names like Lovely, Beautiful, Chance and Happy – not to knock any of them for their names. L’Air de Rien by Miller Harris was a refreshing change.

Well I now know the answer. There’s no beating around the bush. It smells like a whole lot like sex.

But there’s much more to it than just that. There’s something primal and unique going on here which was totally unexpected. It’s a comforting scent in a delightfully sublime way. A laid back and savoring the moment type of feeling kind of washes over you with it on. It smells like sweet sweat, trust and forgiveness wrapped together.

What I first noticed about it was a really lovely smell of neroli and amber. It reminded me of something lived-in and cozy, just like a ratty sweater which may even have holes in it but you can’t bear to part with. But soon after, I became aware of something that immediately reminded me of a just after having had sex aroma. Yes it was definitely a dirty birdie note. It wasn’t really unpleasant but it did come as kind of a shocker.  There’s also a sublimely nostalgic quality that really takes over.

Granted, the dirty panties smell isn’t the primary smell here and I’ve heard others describe it as the smell of hay or dusty curtains. But it definitely has an unusual aroma that oddly enough really works here, however you might interpret it. It kind of smells like a morning after scent, a dream or memory of sex as it dries down and becomes powdery.

L’Air de Rien lasts forever on the skin – on me it lasted at least 10 hours. Another big plus: the sillage is amazing!

Fragrantica calls this an “oriental woody” fragrance and lists its notes as neroli, patchouli, oakmoss, amber, musk and vanilla.

Have you  already tried L’Air de Rien? If so, please leave a comment below since I’d love to hear your thoughts:)