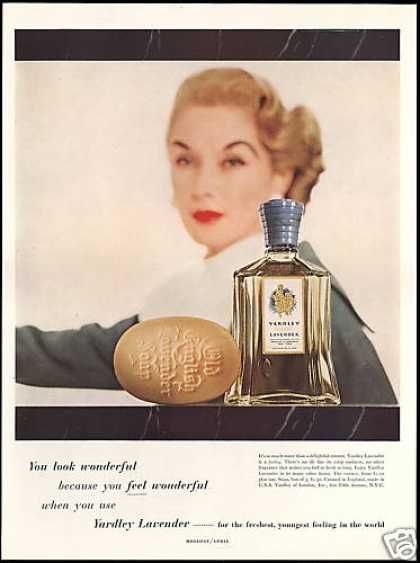 Probably best known for the fact that Marilyn Monroe wore it back in the 40’s and 50’s, Yardley’s English Lavender is an evergreen scent. It’s not all about lavender though, which is lovely in and of itself. There’s something about the mix of  herbs, namely rosemary, eucalyptus and clary sage, that meld so well with the woodsy, oak moss and musk, and seem to refresh the lavender notes.

As far as lavender perfumes I have to confess that I’m not a huge fan. There are some, like Serge Lutens Gris Clair , that deserve a lot of respect and smell truly incredible but lavender perfumes don’t float my boat. Lavender soaps, room sprays, sachets and candles – Yes Please.

The original Yardley English Lavender, released in 1873, was popular in the Victorian period in England and was imported in the 1880’s to the US where its colognes and soaps became popular in American households. The variety of lavender used by Yardley was selected after a several year search to locate the finest variety.

In 1998 Yardley was placed into receivership after numerous failed attempts to update its old-fashioned image. The company was bought out in 2005 by Britain’s fifth richest Indian family, the Jatanias, and it became part of their Lornamead brand. The scent was reformulated at least a couple of times and since 2012 has gone in a decidedly more femme direction.

Granted I’m not sure if I can identify the scent of English lavender from Spanish or Italian (or any of the other 450 varieties), but all lavenders have an herbal, almost medicinal quality and some have quite a sharp smell. There’s something about the smell of lavender that’s deliciously transporting, relaxing and cooling. The lavender in Yardley’s English Lavender is rich and soothing, the type of scent you might want to spray on your pillow to ensure a good night’s sleep.

English Lavender projects a bright, uplifting imagery and smells very much like the English countryside. It’s clean, uncomplicated and refreshing. The only downside is that the scent fades pretty rapidly, but at this price point who cares. Just slip a bottle in your bag and spritz on the go with no guilt!