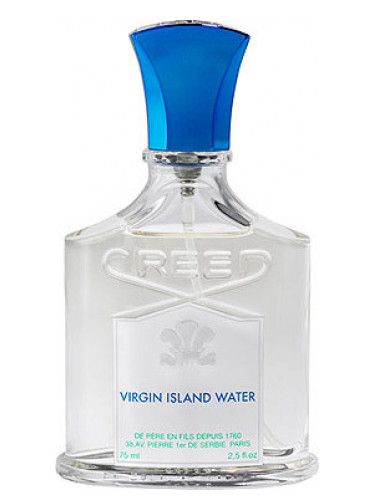 Despite its hefty price tag, Virgin Island Water is a tropical concoction that doesn’t disappoint. Remember that Harry Nilsson song “Coconut” that was brilliantly used in Quentin Tarantino’s movie “Reservoir Dogs”?  Put de lime in de coconout and drink em bot up. I’m not suggesting that you actually drink this stuff but you may want to since it’s so mouthwateringly delicious.

The Paris-based Creed empire has been a family-owned company for over 250 years and was originally established as a tailoring house in London. It became known for fragrance in the 1980s and has produced a number of noteworthy scents such as Green Irish Tweed (1985) and Aventus (2010). The current generation consists of Oliver Creed and his son, Erwin. Virgin Island Water was released in 2007 and was inspired by a sailing trip near Ginger Island in the Carribean.

If you asked me to name my top perfume brands Creed wouldn’t make the list and not just because I think their prices are ridiculous, but I really do enjoy Virgin Island Water. This coconut lime juice really nails it, especially the lime part, which is really more like lime in 3D. I prefer it as a casual summer scent but it can be worn any time you’re craving a pleasant and versatile fragrance. The lime is softened by the coconut undertones but the two play so well together. Just one spritz sends me off on a tropical sailing excursion, with the sun beating down hard and feeling drunk on sea spray.

According to Fragrantica, the heart notes are said to include Indian jasmine, sweet hibiscus, exotic ylang-ylang and cold, spicy ginger. Most apparent to my nose is the ginger which gives it a little kick. Around 20 minutes later, you start noticing a musky sweetness with just a hint of Malibu rum.

There is definitely a tropical cocktail vibe going on here so if you are one to turn your nose up at the offer of a cocktail, this won’t be for you. If you’re a die-hard  piña colada or mojito aficianado, then this might be right up your alley.

Refreshingly light, envigorating  and warm, Virgin Island Water lasts about 8 hours on my skin.  It remains delicate and balanced throughout.

For other beachy scents that are more price-friendly, check out some I mentioned earlier here.