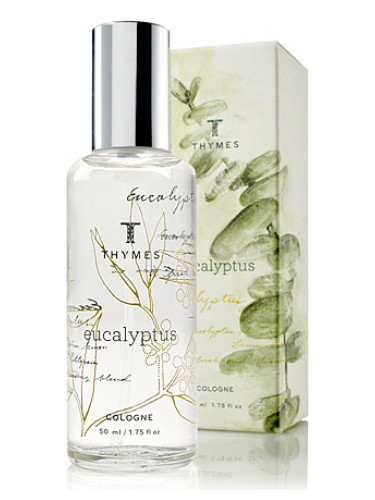 After growing up in Santa Barbara, CA I’m no stranger to the stately eucalyptus tree and its minty, pine aroma. Just the faintest whiff of eucalyptus brings me fashbacks.

The scent of eucalyptus can be tricky to get right in fragrance other than when used in room sprays or diffusers.. Too often it smells medicinal and brings to mind Vicks Vapor Rub and having a really bad cold.

I first discovered Thymes Eucalyptus years ago when I was given a bottle of the body lotion as a thank-you from a friend I’d done a favor for. It was so long ago that I remember the person but not the reason for the gift.

When first sampling it, you are hit by an unexpected burst of citrus which lends an aldehydic, soapy quality. There’s something minty that reminds me of sage. Very invigorating and clean smelling. It also has a refreshing grassy/woodsy vibe. I’d place my bet on petitgrain for that part of the equation.

It’s not as much the smell of straight up eucalyptus as a warm and soapy interpretation.  Which is a good thing since I don’t think smelling like a eucalyptus tree would be considered a good thing.

Thymes Eucalyptus is unlikely to be my go-to body lotion since it has a way of drowning out and/or clashing with perfume but I enjoy it on its own. I’ve purchased bottles over the years since then and enjoy its cheerful aroma. Part of that is due no doubt to its taking me on a little walk down memory lane. ?

The scent is unisex and really is unlike some  who claim to be unisex but veer more towards traditional feminine or masculine leanings. It’s available in a cologne 50 ml bottle as well as other body care products in addition to the lotion.