Love it or hate it, Fracas by Robert Piguet is the undisputed queen of all tuberose perfumes. It is considered by most to be the benchmark tuberose fragrance, the one that all others attempt to copy in one way or another.

According to the Oxford Dictionary, the word fracas means “a noisy disturbance or quarrel” and that pretty much sums it up perfectly. Fracas hits the unsuspecting like a bomb exploding under their nose and is a full-on assault on the senses. It is a veritable diva of a perfume, charging into the room and commanding you to pay it attention. One of the heaviest, strongest and intense perfumes created, there’s nothing subtle about Fracas.

Released in 1948, Fracas was the third perfume to be released by the Parisian couturier Robert Piguet and is the work of legendary perfumer Germaine Cellier. Cellier was a known eccentric who was notorious for such antics as stealing runway models’ underwear so that she could “smell the best of their femininity”. Cellier dedicated the perfume to actress Edwige Feuillere who shocked the world with having the audacity for appearing naked (of all things!) in the 1935 film Lucrece Borgia.

It was an immediate hit on the shelves and quickly became the “it” scent for the woman seeking a perfectly coiffed, decadent and slightly dangerous persona. 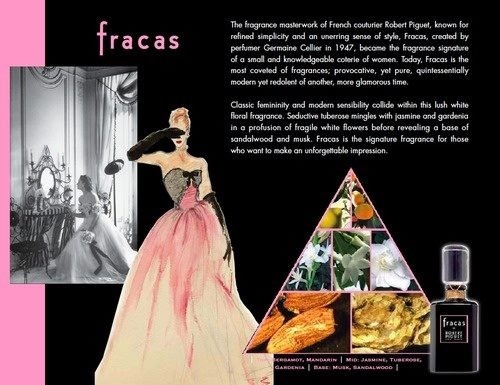 One of the most interesting aspects of Fracas which many are unaware of is its history. The 1940’s saw a proliferation of animalic-based scents containing ingredients like civet, musk and castoreum. Over time these ingredients became banned or were no longer available and fragrances from this era had to be reformulated.

This was to be the unfortunate fate of Fracas.

In 1985, Fracas was reformulated, produced and distributed under “Alfin Fragrances Inc.”, a well-known American beauty brand, under its Swiss division “Orinter”. Apparently the reformulated version looked and smelled quite different from the original. In the mid-1990s, the Robert Piguet name was bought by Fashion Fragrances and Cosmetics (FF&C).  they succeeded in creating a version of Fracas that was much closer to the original in terms of appearance and notes according to most perfumistas.

Fracas was back in action and soon returned to its status as cult legend. Renowed perfume critic Lucas Turin refers to it as the “Ferrrari” of perfumes and it was inducted into the FiFi (Fragrance Foundation) Hall of Fame in 2006.

This is exactly the type of fragrance that leads to no fragrance rules in office buildings. It’s the kind that sends anyone with perfume sensitivities coughing and gasping for air if someone wearing it happens to walk by. It’s a beast.

Although I have a great deal of respect and admiration for the sheer grandeur of Fracas, you will not find me wearing it. I have a tiny bottle at home that I take out from time to kind when I want to revel in its power and presence but most of the time I keep my distance.

If you are interested in trying Fracas out I recommend you start with a sample. I got mine from a trusted site – Surrender To Chance.