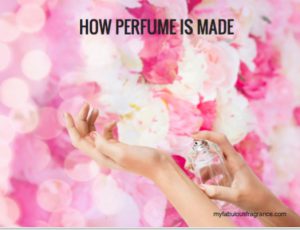 Spritzing on your favorite scent may be such a routine habit that you might not think twice about it. But have you ever wondered how perfume is made?

It all starts with the ingredients. Before the manufacturing can even begin, the raw materials must be assembled. Almost all fragrances require flowers as you probably already know, but many also contain, fruits, grasses. resins, spices, leaves and gums. Flower essences are similar to wine in that they are very affected by the climate and soil and will smell differently from year to year depending on the harvest, like a wine vintage. Although there are numerous flowers that are used in perfumes, the most popular flowers include roses, jasmine, violets, lilies, orange blossoms and plumeria. Others that are less commonly used are lavender, magnolia, moonflower, chamomile, rosemary and sweet pea. 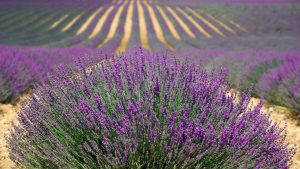 A small number of high-end perfume brands such as Chanel actually own their flower fields to ensure that there won’t be issues with having enough product for their perfumes. Sometimes animal products are used in perfumes, such as musk from male deer or ambergris from sperm whales. Since not enough of a required product is always available in nature, some companies create synthetic chemicals to mimic them. This can be a good thing since it saves the lives of animals who are killed for their oils. 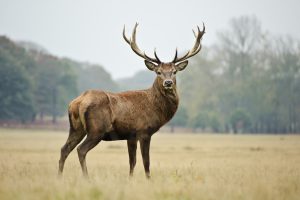 Many perfumes utilize synthetics for additional reasons as well. Synthetic creations can provide scents which don’t even exist in the natural world. Many musk scents are currently produced artificially to produce a more neutral tone and this does away with the need to harvest from animals. Calone is another snthetic compound that is widely used to produce a “sea-breeze” scent. Some popular fragrances that contain calone are Davidoff Cool Woman Water, Christian Dior Dune and Issey Miyake L’eau d’Issey. The debate continues as to whether synthetic scents are better or worse than natural aromas. In my opinion, the choice should be left to the preference of the wearer unless, of course, the synthetic contains dangerous or harmful ingredients. In that case, it should be promptly taken off of the market.

Ingredients used in making perfume can be roughly put into 4 groups:

Primary scents (Heart): May be one or several main ingredients for a certain concept such as “jasmine”. Or, multiple ingredients can be used to create an abstract primary scent such as a rose and jasmine blend. Cola is another abstract scent that is sometimes used.

Modifiers: These ingredients change or transform the primary scent to give it the desired characteristics. Examples of this are using fruit esters to create a fruity floral or citrus scents such as lemon can be used to create a fresh floral.

Blenders: A group of ingredients that smooth out the transitions of a perfume between the different layers or bases. Linalool and hydroxycitronellal are two common blending ingredients.

Fixatives: Ingredients that are commonly used to bolster the primary scent; wood scents, resins and amber bases are frequently used.

The next step is to to extract oil from these ingredients since it is the oils that are actually used to make perfume. There are several ways to do this. The oldest and least complex way to do this is expression, a process where the flowers and plants are manually or mechanically squeezed until the oil is released. Maceration and enfleurage are other methods which can be used. During this process, the ingredients are pressed between layers of animal fat or grease until the scent oils saturate the fat, creating enfleurage pomade. Another process sometimes used is steam distillation, where the oils are obtained by boiling or steaming the plant parts. Yet another method used is solvent extraction. During this method, the ingredients are dissolved in benzene and exposed to ethyl alcohol. After this has occurred, the alcohol is burned off so that only the perfume oil remains. 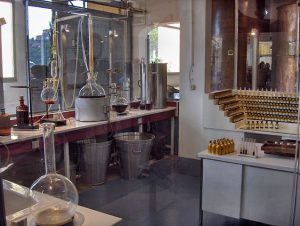 After all of the extraction has been completed, the oils are ready to be blended together according to be a formula determined by a master in the field, known as a “nose”. This can take several years and hundreds of ingredients in order to achieve the desired scent. After the desired smell has been achieved, alcohol is mixed into the potion to dilute the ingredients. It’s the amount of alcohol that’s added that determines whether the liquid will be a Eau de Cologne(EDC), Eau de Toilette (EDT), Eau de Parfum (EDP) or Perfume (Parfum). Cologne is the least potent of the four, containing between 2-4% essential oils, and usually last for up to 2 hours.  Perfume contains 20-40% essential oils and is the strongest scent, generally lasting between 6-8 hours.

But we are still not done…

The final step to complete before the fragrance hits the shelves is the aging process. Perfumes must be aged so that the oils will bind properly to the alcohol and thus be able to wear well on the skin. During this time, the fragrance is set aside in a dark, cool area. Again much like wine. It remains here for at least several months and up to a year. After it’s time is up, the perfume is smelled by an expert to make sure that it smells correct. At this point, the scent usually smells much stronger than it did prior to aging. If it isn’t perfect, adjustments and additional blending will take place. 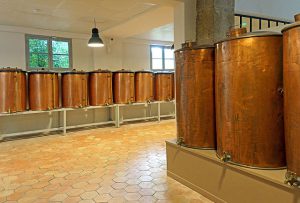 It’s  fascinating to learn about the history of perfumery, and I’m talking here about more than the history of people trying to smell nice. The Egyptians developed aromatic oils and essences 5,000 years ago.  Since the distillation of alcohol wasn’t known yet, the scents were extracted by steeping plants, flowers or splinters of fragrant wood in oil to obtain essential oil. The materials were next soaked onto a piece of cloth which was later wrung until the last bit of fragrance had been obtained. It is said that the most preferred oil was balanos, followed by fresh raw olive oil and almond oil. True lovers of perfume, the Egyptians are known to have used almond, rose, frankincense, myrrh, cedar, mimosa, lily, nutmeg, sweet balsam, cassia, benzoin and labdanum in creating aphrodisiacs, medicines, cosmetics and incense. The royalty and elites of Egyptian society would often wear aromas such as lily as proof of their status. 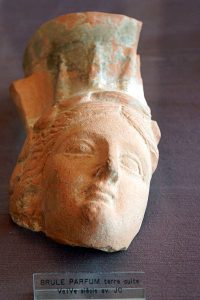 The art of perfumery in ancient Egypt was so sophisticated it has been recorded that when archaeologists opened Tutankhamen’s tomb in 1922 they discovered an ointment that still carried a scent. This passion for fragrance spread to other ancient cultures. In Greece, athletes anointed their bodies with aromatic oils and at banquets Romans refreshed themselves between courses with flower scented water. Persians were credited with developing the technique of extracting oils from flowers through distillation.This practice was brought to Western Europe at the time of the Crusades. (Michael Edwards, Fragrances of the World).

The Spice Road opened new doors for early perfumers. Prior to the expansion of the spice trade, perfumers in Europe were using the raw materials available to them, mostly consisting of herbs and some locally grown flowers, to create their fragrances. 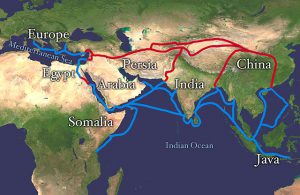 Even though the origins of spices were known throughout Europe by the Middle Ages, the Venetians had a hold on trade routes. Venice was the sole purveyor under ironclad agreements with all of the major powers of the day in exchange for protection by its mighty fleets. At this time the most sought-after spices were pepper, cinnamon, ginger, cassia and tumeric. Between the 5th and 15th century, there was so much demand for spices by the Europeans that prices had skyrocketed. During this period, the world’s top producers of the most important spices were China, India and Indonesia.

France became the European center of perfume and cosmetics starting in the 14th century. Cultivation of flowers grew into a major industry in the south of France, mainly in Grasse, which is still considered by many to be the perfume capital of the world. During the Renaissance period, from the 14th through the 17th century, perfumes were used primarily by royalty and the wealthy. It is said that they were often used to mask offensive body odor due to the hygienic practices of the day. 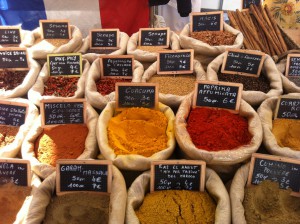 The United States made its entrance into the world spice industry in the 18th century, when American businessmen started their own spice companies and started dealing directly with Asian growers rather than European companies. American companies started getting rich which led to more and more companies forming as well as many more around-the-world voyages for spices. As spices became more common, their prices plummeted and the wealthy monopolies started to crumble.

In early America, the first scents were colognes and scented water by French explorers in New France. Florida Water, a simple blend of eau de cologne with a dash of cloves, cassia and lemongrass was very popular.

Today we live in a new era of fragrance. Alongside niche perfume bands like Strange Invisible and CB I Hate Perfume, are the giant multinational firms like IFF, Symrise, Firmenich and Givauden. These big boys have legions of organic chemists who work alongside marketing people and highly trained “noses” to build both custom fragrances and individual molecules for sale to independent perfumers. Some of these individual “aroma chemicals” can create fortunes. Dior perfumer Edmond Roudnitska purchased the exclusive rights to a molecule named Hedione in 1966 and used it to produce the best-selling Eau Sauvage, a clean and very unique floral. One of the molecules that is in currently in vogue is iso-E Super which seems to add an idiosyncratic floral effect to anything it’s added to.

In the past decade there has been a huge increase in niche perfumery. There will always be a market for the designer perfumes for  people simply wishing to smell great and not minding that there are millions of others wearing their exact scent. If you are looking for something unique and personal and don’t mind paying a lot more than you would for most designer fragrances, then niche perfumes might be worth trying. I personally wear both.